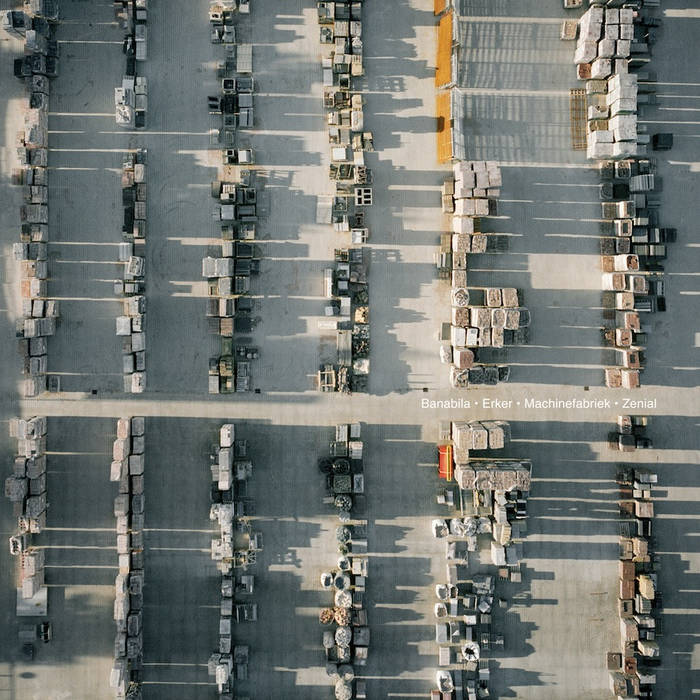 Gwylan I really like the convergence of ambient and jazz influences...

12-inch 140 gram vinyl. Handnumbered limited edition of 250.
Comes in a full colour matte sleeve.
Artwork with kite aerial photography by Gerco de Ruijter.
Immediate download of 5-track album in your choice of high-quality MP3, FLAC, or just about any other format you could possibly desire.

B1. DROPS - Banabila (exclusive track).
B2. MORE SIGNALS FROM KRAKROT - (The Latest Research From The Dept. Of Electrical Engineering) Banabila & Zenial.


VITAL WEEKLY 895:
The ever so busy Michel Banabila, from the city of workers, as we say in The Netherlands. Here are some of his most recent releases. The Banabila I once knew, the one that was interested in ethnic music, is a man of many talents. In many of his recent works he displays an interest in all things electronic music, from industrial to musique concrete and then towards, as easily it seems, quiet, ambient and introspective music. The first release is a five track mini LP/12"/Lp which has two songs by Banabila, and then one each in collaboration with Polish composer Zenial, home town boy Machinefabriek and somebody named Erker. I assume the latter plays saxophone on this highly moody piece, a film noir soundtrack. Two pieces are exclusive to this track, the other from previous releases, so I wonder for whom this teaser record is actually released. Why not an all new, all exclusive record? I did hear the piece he did with Zenial and it's still a powerful piece of everything dark and
dance alike. The other four pieces are all much more introspective and relaxing. The film noir piece with Erker, but also the more abstract imaginary film soundtracks of the other three. Here we find an absence of rhythm and a strong love for sound processing with the aim to create some excellent mood music. If you like vinyl and you need an introduction to the recent Banabila (or maybe an update if you know his work from ages ago), then I'd say do not look further. (FdW)

THE SOUND PROJECTOR :
Here comes Dutch sound artist and composer Michel Banabila, makin’ up a mess of fun with some like minded collaborators on this fine LP from Tapu Records. This is Banabila’s show, in that he appears on all five tracks, but all participants receive equal billing, which is exactly as it should be. The sleeve photo is an aerial perspective taken by fellow Dutch citizen Gerco de Ruijter, using a camera attached to a kite. It’s a beautiful image in its own right, and also provides a handy reviewer’s metaphor for the album as a whole – a free floating overview of Banabila’s musical endeavours in electronica, ambient, classical, jazz and soundtrack music. Proceedings kick off with “Ill Rave”, a new collaboration with Machinefabriek. This isn’t quite the techno banger the title might lead you to expect. Instead, it’s a gentle but insistent pulse, punctuated by waves of static and washes of industrial sound, with something subliminal going on behind it all. This mood continues with “Crowds”, a Banabila solo piece built on a similar combination of elements, riding in over a backwash of human voices that remain tantalisingly out of reach. “Deep In The Forest” showcases a jazzier inclination, the electronics overlayed with vibes and the arboreal saxophone of Mete Erker. Side two opens with the desolate ambient electronica of “Drops”, another Banabila solo effort produced especially for the occasion. “More Signals From Krakrot” brings things to a close with a cosmic crescendo, ambience giving way to techno beats and the human voices finally breaking through in bursts of delirium. This one comes from The Latest Research From The Dept of Electrical Engineering, made in partnership with Polish musician Zenial. In some ways, this album is an odd beast, a curious hybrid of exclusive tracks and previously released material that’s neither new album nor full-on career retrospective. Nevertheless, as an introduction to the world of Banabila and his cohorts, you could do worse. Much to explore and enjoy, so no Sour Grapes here ! (Ian Sherred)