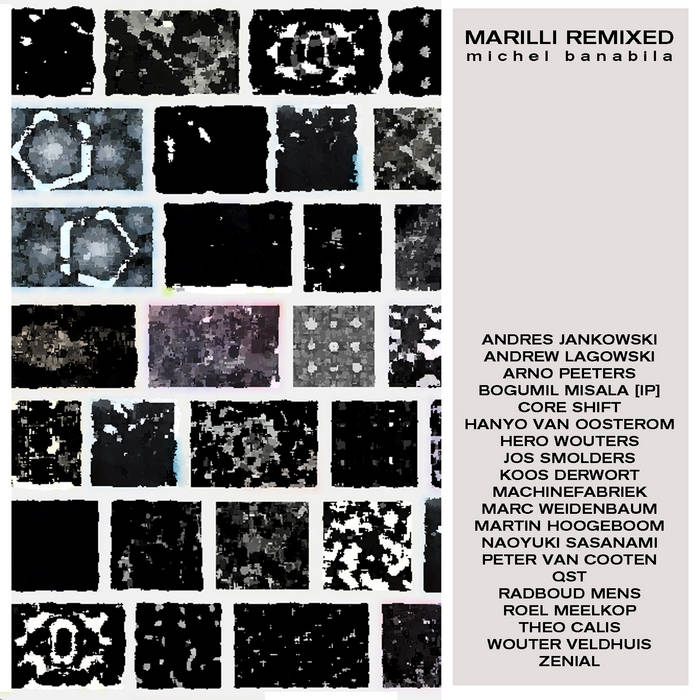 Marilli was the first full-length album that I self-released as a 33 1/3 rpm vinyl LP. It dates back to the very first time I began to experiment in a studio.

I was like a kid entering a toy shop, totally excited and, of course, I got hooked forever. Anyway, Marilli consists of quite simplistic and somewhat hilarious recordings. It was recorded on 8-track tape in three studios across Amsterdam: Hero Wouters, WHG and SPN.

There was no sampler used, but I "borrowed" some voices from other records. The sounds on Marilli were nice and organic, but my "composing" process was not. The overall effect is extremely naive, an act of musical global tourism perhaps best compared to "Tintin en l'Afrique," or the "piña colada Jungle Book version of My Life in the Bush of Ghosts." Quite embarrassing, really. Anyway, you can't change the past. This is simply how and where I started.

Nevertheless, what happened was that to my great surprise several labels asked me, quite suddenly, in 2015 if they could re-release Marilli. There was even a little article about it on the Resident Advisor website: www.residentadvisor.net/feature.aspx.

I certainly don't want to re-release it. However, Hanyo and Koos made a beautiful remix of track A1 that more or less launched the idea for starting this remix collection. So, instead of thinking about a re-release of the original, I thought it could be interesting to ask some friends for their vision and then remix it. This was also inspired by the way the Disquiet Junto music project series works. I had just one copy left of Marilli, and Radboud Mens ripped, de-noised, and de-crackled it into WAV files. I feel quite honored and grateful for the immediate response, as 20 talented artists came up with these really amazing works to transform the album into a more minimalist 2015 version. I asked them to skip the voices in their remixes, and to only use sounds from the record itself. We started with the order of songs from the original album, and then more versions followed.

Actually, I suppose you can change the past, because although I am not so fond of the original, I am now very fond of this remixed version. What a great solution. Much thanks to the participants for their creative reworks.

I also like to thank all the wonderful musicians who contributed to the original album, and whose sounds are now re-emerging here in a totally new way:

This is a "pay what you want" album on Bandcamp, under a Creative Commons license. Download only. And also streaming and downloadable for free on the Internet Archive.

A special thanks to Eduard Vingerhoets and Richard Johnson.

Here is an old live recording for VPRO radio in 1984 with some of the musicians from Marilli: banabila.bandcamp.com/track/live-vpro-studio-1984

UPDATE May 2017:
Well.... 3 years later ... offers were still coming. And I changed my mind. Maybe I got a blind spot or maybe I just started to pay attention and listened more to what others had to say on this, like Tako Reyenga and Brandon Hocura. Anyway, the Canadian label Séance Centre will reissue Marilli on a 2LP vinyl, entitled Trespassing, summer 2017. www.seance-centre.com/releases

AMBIENTBLOG:
I still clearly remember hearing an unknown artist performing on a sunday afternoon radio program in 1984 (‘Spleen, VPRO). I learned that Michel Banabila had self-released his debut album called Marilli – which I immediately bought from the only record shop in Amsterdam that stocked it. That was the beginning of a long and adventurous fan-relationship: I have been following Banabila’s music for over 30 years now! The music he currently creates is very different from what he created back then: Banabila considers his debut as a ‘quite simplistic and somewhat hilarious recording […] Quite embarrassing, really […] The overall effect is extremely naive, the sounds were nice and organic, but my “composing” process was not’. While this may be true from the viewpoint of the artist that has grown and looks back on his early work, the original album still has the same feeling for me… it presented new sounds, a new freedom, a new ‘world fusion’ music (remember: this was relatively short after the release of Eno/Byrne‘s ‘My Life In The Bush Of Ghosts’). (Marilli also marked the start of a new collective called Chi which did some remarkable multimedia ‘fourth world ambient’ performances.)

“You can’t change the past”, Banabila concludes and he decided that there will be no re-release of the original Marilli.

But things took a different turn when 2015 saw renewed interest in the debut album. Former Chi-members Hanyo van Oosterom and Koos Derwort made a remix of the first album track and that became was the launch of a new project named Marilli Remixed: 23 remixes of the original analog recording by artists from all over the world (including Michel Banabila himself).

‘I asked them (the remixers) to skip the voices in their remixes, and to only use sounds from the record itself. (They) Came up with these really amazing works to transform the album into a more minimalist 2015 version. It has become a remarkable collection, especially for those that still can remember the original album, of course. But that’s not necessary – those that dón’t know the original will find pleasure in the 2015 remixes too. No matter Banabila himself may think of his original work, it clearly was worth remixing: the respect for the original material is felt in all details. (Peter van Cooten)