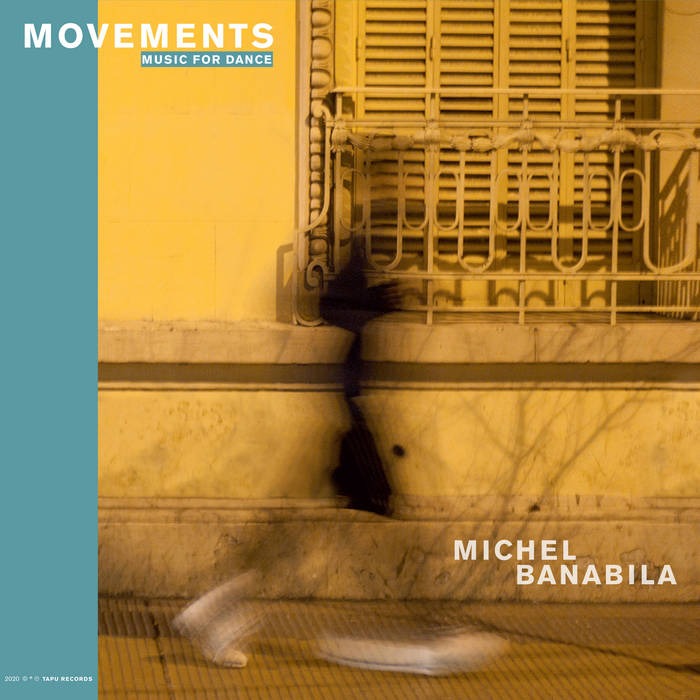 YIN YUE for THE PENNSYLVANIA BALLET:

A1 - DRAGONFLY 2
Original soundtrack for the choreography 'A Trace of Inevitability'
by Yin Yue with Pennsylvania Ballet, in accordance with Yin Yue Dance Company & Pennsylvania Ballet.
This music was commissioned by Pennsylvania Ballet and premiered at 'World Premieres 2019' in the Merriam Theater, Philadelphia, USA, November 7th, 2019.

When I first came across Michel Banabila’s ‘Movements (Music For Dance)’, I read the title in Abe Simpson’s voice. Music for dance, sneakers for sneaking, you get where I’m coming from. This logic of this record is just as succinct as grandpa Simpson’s, collecting as it does a selection of work that the Dutch composer/sound artist has made for various contemporary dance productions. These eight tracks represent a decade of Banabila’s career - ‘Dragonfly II’ and ‘Illicit Acquirement’ premiered barely a month before 'Movements (Music For Dance)' came out while closing number ‘A Strong Sense of Urgency’ dates from 2009. When heard in this light it becomes fascinating to chart the development of Banabila’s practice across these ten years. The earlier pieces are concerned more purely with rhythm, channelling a cinematic sense of foreboding through driving drumlines that verge on techno at times. Vatican Shadow is not a million miles away, though the dance context inevitably gives tracks like ‘Crowds (Big Data Poetry Mix)’ a bit more of a high-art feel.

While this sound remains in the recent work, Banabila’s touch has become more deft of hand. This is apparent from before you even put ‘Dragonfly II’ and ‘Illicit Acquirement’ on - both tracks are afforded a whole side of wax here, their length a testament to Banabila’s widened scope. While they do eventually blossom into driving groove-based music - ‘Illicit Acquirement’ has a cool Venetian Snares-type thing going on - their opening passages are characterised by a hitherto-unheard lack of drums. There’s both Penguin Cafe and Steve Reich to ‘Dragonfly II’s nimble-fingered string work, and ‘Illicit Acquirement’ begins with some of the most abstracted sounds on 'Movements (Music For Dance)'. Banabila executes both moves expertly, successfully broadening his sonic palette without sacrificing the emotion and muscularity of those earlier compositions. (Fred MG)

AMBIENTBLOG:
If one thing is clear from his 37-year musical career it’s the fact that it’s hard to pinpoint Banabila‘s music into one single style or genre. Incorporating world music influences with theatrical scores, jazz, voice samples – on to much more abstract experimental music, neo-classical … and all things in-between. It takes an open mind to follow him everywhere he goes. If you listen carefully, you cán hear a certain style and recognize Banabila’s music immediately. He’s built his own genre.
Theatrical performers, as well as documentary and television directors, have always recognized the power of his music. Movements is a stunning demonstration of works that were specifically created for dance performances over the years. In a way, it is also a compilation of Banabila’s most powerful works: many fragments and samples are taken from his previous works. But it is not simply a compilation of previously released tracks: the works are re-composed, restructured and refragmented to build new compositions to fit the demands of the choreographers for their performances.
The four sides of (the double vinyl edition of) Movements are each dedicated to a specific choreographer: Yin Yue (Pennsylvania Ballet), Patrick O’Brian (CUNY Dance Initiative), Conny Janssen (Conny Janssen Danst) and Annabelle Lopez Ochoa (BJM Danse).

The music presented on Movements is hardly comparable to his experimental electronic works in dialogue with Machinefabriek, or his orchestral works in Uprooted earlier this year. This is very physical music. It only takes Dragonfly II, the piece on side A, to acknowledge this: opening with shifting sounds, showing his influence from Steve Reich, it intensifies into a dervish-like percussion frenzy that is guaranteed to make your palms sweat.
The same goes for most of the other pieces: starting slow but gradually luring you into an inevitable and inescapable climax. Illicit Acquirement (on side B) starts peacefully and keeps up a slow pace for most of its 19 minutes – apart from the accelerating end sequence. Crowds (featured in the Big Data Poetry Mix here) must be one of Banabila’s most intense works ever: the constant presence of the sound of a protesting crowd indicates the times are changing, but will it bring freedom or will it bring doom?

The physical edition of Movements is a luxurious heavyweight vinyl double album: the hardback gatefold cover and inner sleeves, holding the 180g teal & gold marble colored vinyl, showing images of the dance productions this music was created for. This limited-edition is definitely worth chasing if you’re into vinyl, but will probably sell out quickly (at the time of writing there are still some copies available at Norman Records (Europe) and Squidco (US). But after that there’s still the digital download to enjoy.
For those that already knew Michel Banabila‘s work, no further proof of his musical capabilities is needed. But for those that were not yet familiar, or for choreographers, movie and stage directors looking for a sound artist this is a great sample of the power of his commissioned work.  I have no doubt that this will be continued in the future. (Peter Van Cooten)

SQUID'S EAR:
Occasionally an album has so much information that needs to be conveyed in the short abstract I write for Squidco's catalog listing that there's not much room for a decent description. Such is the case with Dutch composer Michel Banabila's Movements double LP, which presents two recent dance works and several prior works, each side of the 2 LPs dedicated to a single choreographer. Banabila has been composing since 1982, working with both electronic and acoustic orchestration, scoring many films & documentaries, alongside sound for video art, plays, and choreography. His work bridges experimental and contemporary forms with a modern sound bordering on electronica but infused with a seriousness of intent and purpose less frequently heard in that style.

His experience shows in his subtle layering of sound and instrumentation, where synthetics and acoustics merge with field recordings and solid rhythmic foundations. He shapes sound to propel his rhythmic work with cues that affect the listener, but without doing so in blatant ways. His use of repetition and variation is solid yet surprisingly understated; compelling, driving the movement without any sense of static monotony. The themes here are clear, a great example found in "Illicit Acquirement" where the suspense and tension slowly build until hallucinatory sirens lurk around corners enveloping the environment. Ultimately the piece resolves to a dynamic and upbeat rhythm that pulls the listener out of their chair, compelling one towards movement. Through 8 works Banabila continues this push-pull of tension, suspense and sly rhythmic introduction. It's an impressive feat that demonstrates the experience and mastery of his skill as a composer.

Add to that the beautiful production values of this double LP, in a very limited edition of 200 copies on 180g teal & gold marble vinyl, the outer jackets a handsome hardback matte varnish finish. The details continue onto the inner sleeves, printed in full color with photos and texts from some of these shows represented in the collection. The detail is admirable and the album a fine testimony to his work. (Phil Zampino)

D2 (A Strong Sense Of Urgency) previously published by Steamin'Songs.