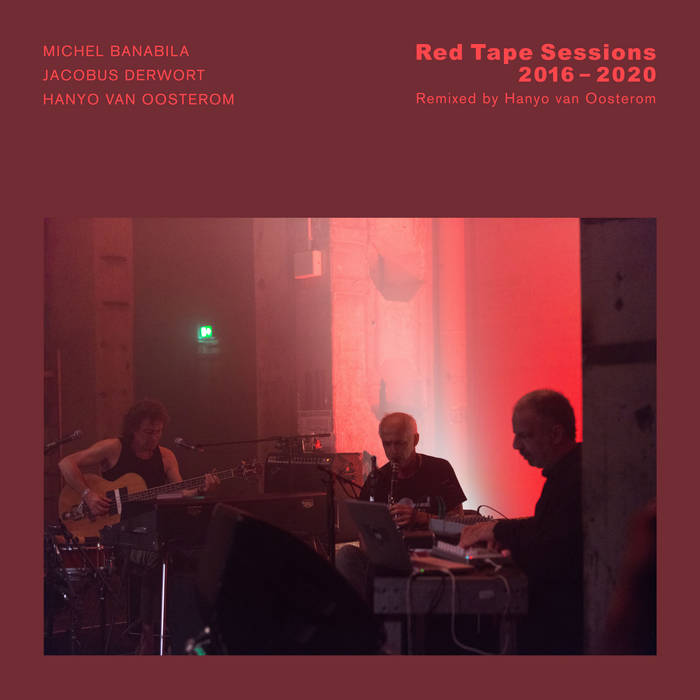 In 2016 UK based label Astral Industries released a reissue of “The Original Recordings” by the Dutch ambient collective CHI, 30 years after the first cassette was published. To celebrate this release CHI featuring Hanyo van Oosterom, Jacobus Derwort and Michel Banabila performed live at the Oto in London in february 2016.
The same year they did concerts at the Berlin Atonal Festival and at the Kino in Rotterdam, where CHI once started in the eighties.

Meanwhile they worked on a possible new album. Michel Banabila recorded hours of new loops, samples and compostions. Some of them were used for their live performances. Van Oosterom started editing and remixing, also using samples of Derwort. The result was the blueprint for a new double album, that was never released.

Four years later in 2020 Van Oosterom found and remixed these ‘lost’ sketches again. The result is “The Red Tape Sessions” Part One and Part Two. Since Jacobus Derwort sadly passed away in 2019 this will be the last collab of them. What is left is a beautiful document as the definite closure of the CHI circle. (Hanyo van Oosterom, May 6th, 2020)

VITAL WEEKLY 1283:
Somewhere in the late 80s, a Dutch group by the name CHI published their only cassette, which was released a few later on the rather short-lived Container label (a sub-division of Staalplaat). I believe I heard the original back in the day when I was writing for a Dutch magazine, but I surely heard the CDs version. It was at the height of the ambient revival that swept the alternative music scene in the mid-90s. In 2016 there was another re-press, now on a double LP by Astral Industries. Although a floating membership, this cassette contains recordings from three members of CHI. I wasn't aware of any other work created by Van Oosterum, who had a string of releases, later on, all in the realm of ambient music, and Jacobus Derwort only had a few releases. He passed away in early 2019. Michel Banabila, I should think, hardly needs an introduction, as his music is to be found regularly in these pages, in a very wide definition of the word ambient music. Following the renewed interest in CHI in 2016, the three started to work together, with Banabila and Derwort creating loops and samples, partly to be used in live concerts but also with the idea of doing another album. With the death of Derwort that stopped and so what is left are the sketches that we find on this forty-minute cassette, with a lovely, almost red velvet, cover (the fabric, not the cake). Comparing these two sides (no individual titles) to the original CHI sound, one can easily see that these are session recordings, meandering about, and yet to be melted into a composition. The classic ingredients of CHI are there; flutes, percussion, bamboo sticks, rainmakers and other exotic instruments, all with that sufficient amount of electronic alienation that keeps this far away from the new age territories. I wouldn't know if this is the Banabila influence, or something more collectively tuned, but it works very well. At times, especially when the flutes are sounding, I was reminded of the early O Yuki Conjugate sound, which is a long-time favourite of mine. It has been a while since I last heard that old CHI release, but on this quiet day, it is next up for listening! Beautiful dark ambient, exotic and strange; just how I like them best. If this is the end for this combination than that is most sad. (FdW)

For more on CHi or The Chi Factory, please visit: numoonlabrecordings.bandcamp.com