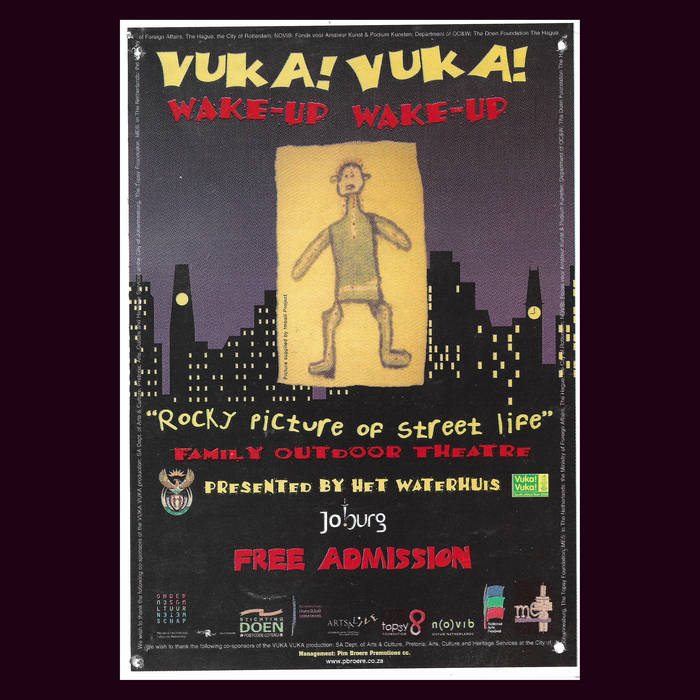 The harsh and tragic lives of South Africa's streetchildren
are the theme of 'Vuka Vuka!', an open air theatre play
performed in Jo'burg & Soweto, by a travelling theatre company.

HUNDREDS of youngsters in Soweto and Doornfontein will get their first glimpse of the performing arts when an international travelling theatre company stops off in Johannesburg as part of its world tour.

The 11-year-old Het Waterhuis youth theatre, based in the Netherlands, has been travelling the world building awareness of social issues through its spirited performances. This tour is no different.

Different venues in Johannesburg will host performances, from 22 June through to 16 July, 2005.

Using actors from local theatre groups, Roel Twijnstra of Het Waterhuis, directed and choreographed Vuka Vuka!, which is isiZulu for "Wake up!".

The show captures the lives of the homeless children who populate South Africa's major cities of Durban, Cape Town and Johannesburg. Vuka Vuka! is a fusion of their stories, telling of the harsh realities of street life, their means of survival and their dreams.

Adding a dash of reality to the production, 10 children from the Topsy Foundation in Bryanston, an orphanage and sanctuary for children who are affected by or infected with HIV/Aids, will also appear.

The Het Waterhuis Theatre previously toured South Africa in 2003, when it performed a musical called Freebirds, which focused on HIV/Aids, to capacity crowds.

"Het Waterhuis is a youth theatre but plays and musicals are sometimes performed to adult audiences to make us aware that what we do as parents affects our children," says Wayne Nhlangothi, the play's publicist.

"This play in particular is intended to reach a wider audience as it deals with an issue that is sometimes brought upon by parents."

Special appearance by ;
13 children and supervisors from Topsy Foundation in Grootvlei.

Other voices recorded in ;
Grootvlei - (Topsy Foundation), Soweto, the streets of Hillbrow.