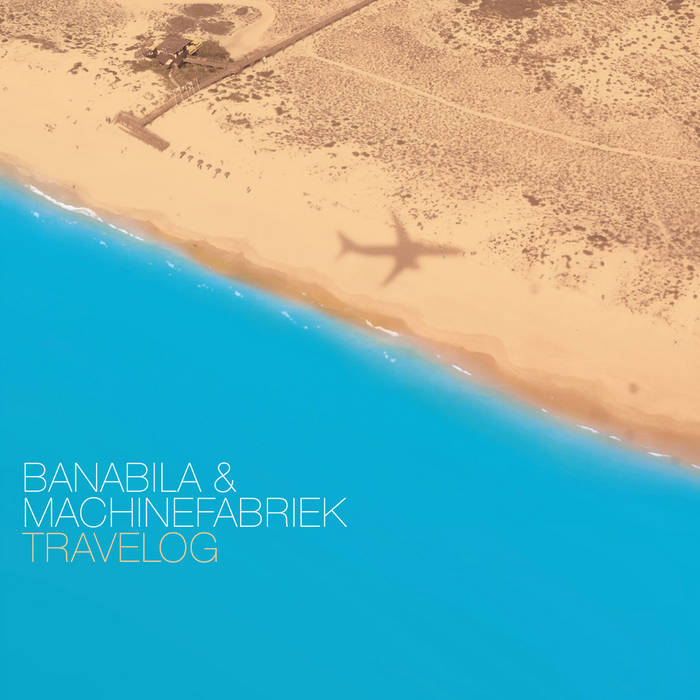 When Michel Banabila and Rutger Zuydervelt (Machinefabriek) finished their first collaborative album, it felt like they were just getting started. Suprised by how fluent and natural their collaboration went, it was obvious that this wasn't over yet...

While 'Banabila & Machinefabriek' was quite an abstract affair, it's successor 'Travelog' is lighter, playful and rhythmic. Some moments might recall the mighty Tape, while others showcase motoric krautrock influences and subtle hints of African rhythms. All in all, this album clearly radiates the joy of its creative process and sees Banabila and Machinefabriek on the top of their game.

Soundcolourvibration:
"Travelog is a collection of ambient and atmospheric soundscapes mixed with emotion filled layers and recordings that tell stories only possible in this medium. Their vivid use of space sets the stage for a performance of a lifetime."

includemeout2.blogspot.nl :
Appropriately, since I've just been out of the country, Travelog by Banabila & Machinefabriek (Michel Banabila and Rutger Zuydervelt) is getting an airing and mighty fine it sounds too. Having lived with it for a few weeks it's grown and grown, perhaps because there's something old-fashioned in the sound. I mean that in a good way. I mean, amid the electronic elements are touches of percussion and bass, along with tropical samples, and those in the wrong hands can sound like old farts trying to be modern.

It's an ever-shifting landscape, as befits the image of flight. White fluffy clouds give way to sandstorms of static and the pulse of a Los Angeles inhabited by Rick Deckard. Narita is ambient in the Eno travelogue sense, whilst Debris is a black hole of static noise which despite being edgy displays the fine touches evident throughout the album.

Just when I think I've got a sense of everything this album has to offer, new layers emerge upon listening again. That's what I mean by 'old-fashioned'. Banabila and Zuydervelt have made a piece of work with great care and in a world where frequently shallow Darkness and trendy Noise come easy, that's a good thing.

Vital Weekly 898:
In Vital Weekly 860 I was very much impressed by the collaborative efforts of Michel Banabila and Rutger Zuydervelt, best known as Machinefabriek. Both from Rotterdam, and Banabila the older of the two, with a long career that took him to world music, experimental music, electronic and Machinefabriek the better known one, certainly internationally. An album of the drones of Machinefabriek and Banabila's more experimental electronics, digital noise vs silence. It's of course not really a surprise that I was looking forward to their second album, which has just arrived. Again we are in for a little surprise, I think. They seem to be moving away from the more abstract, sound collages towards more coherent… 'songs', is perhaps the word that covers this best. Especially in the first few pieces of this CD, there is a certain 'pop' like character to the pieces, a light weight character even, which sets for a sunny tone in these pieces. Also they are well rounded, with strong melodic touches. Something which we perhaps don't expect that easily from Zuydervelt, whose strong point of recognition is the more ambient, more subdued side of music. Maybe Banabila is the one whose trademark is at work here? I am just guessing of course, but this change of work is great, I think. Even when a piece like 'Debris' is more like what we found on their first collaborative CD, it doesn't become an odd ball in this forty minute collection. Gone are the shorter bits but the addition of rhythm machines here and there make all of this an excellent experimental, instrumental rock like album, at times. It's a bit of all: poppy songs, post rock, ambient and experiment. It's all part of this excellent album, which you could play over and over, and discover something new all the time. (FdW)

Anhedonicheadphones:
The press release for Travelog indicates that it’s lighter and even “playful” in comparison to their previous effort. Once “Spin ‘n Puke” gets going—you’ll agree. The rhythmic world-influenced percussion and handclaps can hypnotize you while synth tones and various other glitches swirl in over the top of everything else.
Don’t be fooled into thinking that Travelog is more “listener friendly.” There are plenty of moments of harsh noise and ambience; it’s just that a bulk of this material leans more towards sounding like it was at least partially constructed beforehand, rather than an improvisation. The incredible urgency of a track like “Runner” is a great example of how that kind of execution succeeds.
Electronic music is the kind of field that has no boundaries—you can use technology to move people to a dope beat, or to scare the ever-loving shit out them with horrifying sounds. Travelog walks the fine line between those two extremes, and it continues to show that the collaborative partnership between Michel Banabila and Rutger Zuydervelt has no shortage of ideas. (Kevin Krein).

Cyclic Defrost:
There’s a deeply meditative feel to much of the music here, making ‘Travelog’ one of the most cohesive yet hard to categorise headphone soundtracks I’ve heard for a while. (Chris Downton).

Incendiary Magazine:
This record has a quality of something special, of something indefinably GOOD about it; in fact so good I think I can get away with calling it brilliant. One thing’s for certain, I can’t get enough of it at the moment. (Richard Foster).

Periwinkle Hear and Now:
Continuing a journey begun with their self-titled release in late 2012, Travelog is the latest release from Michel Banabila & Machinefabriek. Spin’n Puke, opens the album, a rudimentary rhythm that sounds like its inspiration was heard played on a log drum, then morphs through a glitched time warp into a giddy, percussive flurry, ending as a pitch-blend glide into a sattelite blip, disappearing in space. The stage is set for a series of small sound sojourns that as a whole constitute a release that like their debut, explores a wide array of texture, rhythm and sound source. Even the covers tell a tale, a vapour trail on the debut is replaced by a planes shadow flying over a desert coast where the water meets land – this time the waters blue spilling over from the debuts sky. The type remains identical, though smaller, again suggesting a continuing journey. The music is akin to a kind of new exotica, it suggests locations, but the locations exist in a hermetically sealed transaction made between the artists swapping and melding sound-files over the web. These locations appear in Narita for example, a disembodied vocal sample from a Yuko Parris and all n4ural track is embedded in a naive melody that has the air of a polite tea party, that is until its crashed by a fuzz storm battling a Hammond. When the storm subsides, we are left in a Japanese garden and we/I realize the opening melody is none other than a folk tune played on a flute while a skittering shishi-odoshi sample charms rather than alarms – or is it, did it, was it meant to be like this? We transition through Antennas to the gauzy Rain Painting, again, fireworks sourced beats are not, crackling and whirring, some rat-tat and we find ourselves in a slurry of fugged, muted beats and keys chiming strangled, it quietly subsides. I’m gonna leave you at Yarra, its my supposition maybe Michel picked up some samples while flying through the antipodes – Yarra’s a river. This approximates a close call with Hassell - bird calls, vocal Eno Airport/Buddesque Plateaux like loops, weird ritualistic yodels – a possible music. You do the rest, put these two musicians/composers together and you have some intriguing and quirkily engaging music – investigate, explore, enjoy. Perry Holt.

Blow Up :
Already accomplices in the making of the interesting work published last year, simply titled after their respective names, Banabila and Machinefabriek with “Travelog” don’t hide their intent to move towards milder climates. They might go a bit too far with this intent in the pleasing, light Spin ‘n Puke, all based on affable beats, but they get back on track with the splendid Narita, which emanates delicious exotic fragrances and lets some cracks appear towards the end in the otherwise idyllic soundscape, and with Antennas, an even more delicate and discrete piece, yet elusive thanks to the intricate work of fields recordings, child voices and glitch. Rain Painting pragmatically destroys the charm, unravelling from a mysterious darkness thanks to the demonstrated assembling art of Rutger Zuydeverlt, who surfaces with less reassuring outlines, after a superb intro of suspended abstractions and the guitar of Michael Banabila resting in a circular but dramatizing impasse. All followed by lazy, slightly ethnical beats inside a drone structure in Dinsdag and capturing minimalism in Debris, which surely is the piece closer to what we had heard in the previous record. They keep for the epilogue Travelog a golden and hardly perceptible romantic quiver which, despite the guitar hiccups in the first half of the track, expands the emotive gamma of the album further.
(translation Sara Witchy)

Voice samples on ‘Narita’ taken from ‘Yuko, me and the Troentechairs’ by Yuko Parris & all n4tural.