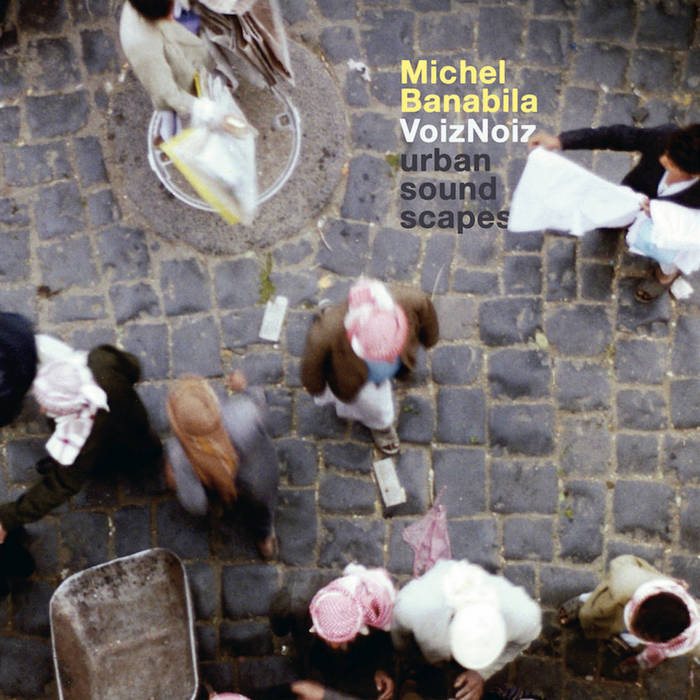 It has been almost two decades since Steamin'Soundworks released Banabila's VoizNoiz CD.The album received great critical acclaim and was licensed to Pork Recordings (UK) and Tone Casualties (USA). VoizNoiz continues to find many afficionados, hence the reason for making it available now on double vinyl LP including a brand new extended remix with Oene Van Geel playing viola, voice and his amazing cracklebox. The double 175g vinyl is housed in a hardback gatefold cover and is Limited to 234 copies. The new 2018 Remix and the original 1999 album are available separate as download. More music from Banabila's back-catalogue was recently released on vinyl through the Bureau-B and Séance Centre imprints.Banabila continues to release new adventurous music as well, often on his own TapuRecords.

WAX MAGAZINE:
“Banabila strings together 20 soothing skunk funk oddities that delight and bemuse in equal portions. Tender beats, oddball samples, live instrumentation and vocal snippets weave together to make a warming abstract picture, one of those ones that looks good whichever way you hang it”

ALL MUSIC GUIDE:
“The strength of this fascinating found-sound pastiche will be enough to send fans of musique concrete, advanced turntablism, and trip-hop scouring the import bins... -it's an example of medieval technique meeting 21st century technology, and the result is wonderful. This is an exquisite album by an artist who deserves much wider recognition.” (Rick Anderson).

ALTERNATIVE PRESS:
“...Banabila assembles riffs from found-sound and vocal fragments into oddly conversational grooves. This approach recalls Coil, but without their inward-looking menace. VoizNoiz is every bit as post-modern as the work of today's DSP-terrorists, but it's a much easier listen.” (Kent Williams)

WAX MAGAZINE:
A thoroughly engaging, amusing and charming debut from new Pork signing Michael Banabila. Slightly more random than your usual Pork output, but still retaining the essential ingredients, Banabila strings together 20 soothing skunk funk oddities that delight and bemuse in equal portions. Tender beats, oddball samples, live instrumentation and vocal snippets weave together to make a warming abstract picture, one of those ones that looks good whichever way you hang it.
(Nov 2000)

ALL MUSIC GUIDE:
The strength of this fascinating found-sound pastiche will be enough to send fans of musique concrete, advanced turntablism, and trip-hop scouring the import bins. Most of the material that comprises these 20 tracks comes from field recordings of human voices speaking, singing, declaiming, and arguing, all of them reportedly made in the streets, buildings, and train stations of Holland and Yemen. The recordings are cut up and pasted together in sometimes eerie and frequently downright funky ways: the result sometimes sounds like a collaboration between Jon Hassell and African Head Charge (as on the danceable "Do Something About It" and the even more Hassell-ish "Sorokin Blues") and sometimes like a cross between Tricky and the Residents (as on the darkly funky and melodically quirky "Chickensoap). On "Where?" the snippets of speaking and singing are arranged by pitch, and the result is a sort of techno version of hocketing; it's an example of medieval technique meeting 21st century technology, and the result is wonderful. This is an exquisite album by an artist who deserves much wider recognition. (Rick Anderson).


ALTERNATIVE PRESS:
Post modern assemblage of found sounds and vocal fragments. Sound collage can often be more conceptually interesting than listenable. Michel Banabila handily avoids this on the unclassifiable VoizNoiz. He uses location recordings from Holland and Yemen, along with live guitar, voices, bass and percussion to construct what he calls "urban sound scapes". Banabila assembles riffs from found-sound and vocal fragments into oddly conversational grooves. This approach recalls Coil, but without their inward-looking menace. VoizNoiz is every bit as post-modern as the work of today's DSP-terrorists, but it's a much easier listen. (Kent Williams).


COOL AND STRANGE MUSIC:
Holland's Michel Banabila is one of those rare musicians who can take an avant-garde conception and turn it into a highly entertaining work of art. VoizNoiz is a masterpiece of found sounds and voices used rhythmically and humorously with obvious nods to Jean Michel Jarre's classic collaboration with Laurie Anderson, Zoolook, without the dark psychological edge, and Coil, without the homo-erotic magick. VoizNoiz is an update of the genre into contemporary trip-hop, with touches of exotica and Asian house music. There is a slight Carribean edge in some parts, but the jack-hammer editing of the sound montage is so intense that by the time one is able to digest an influence, it has been replaced by something completely different. Think of a tropical island version of Tipsy, only more cartoony (which is no surprise as the executive producer is the legendary animator Gabor Csupo.) Though the CD is separated into 20 different tracks, I defy anyone to figure out which one is which without looking at the track indicator. It's like a lovingly unified vision of schizophrenia done Tex Avery style. (Wilhelm Murg)


PITCHFORK:
The Pork folks discovered Banabila and flourished this remarkable disc with "Mono/Metro," a holler-sampling-and-contorting fragment of genius that Moby would stomp Fairfield County, Connecticut into the subsoil for. (Paul Cooper).

DIGITAL ARTIFACT:
Twenty wonderful tracks with a modern feel and surprisingly organic feel. The first half of the CD made me feel like I was in one of those old 50's beatnik surrealist movies that usually didn't have soundtracks. The flowing narrative, workings of Banabilla make for a great score to such silent surrealist flicks. It's also very danceable. Not to say you'd expect to find this in a dance club but dance in the performance arts meaning pairs nicely to the composition. The second half slowly started more and more like the present until it seemed to be a musical commentary on life in the urban setting. This release is quite refreshing not only because of its mature, precise stylings and fine production value but also because of its extremelyexpressive feel. A wonderful and most recommended listen . (Kae)

AMBIENT MUSIC GUIDE ('Best Reissues of 2018'):
It seems DJ Shadow and Art of Noise had a love child in the 90’s and nobody told me. My strangest discovery of 2018 was this reissue of an album from 20 years ago by the prolific and talented Dutch alchemist Michel Banabila. On VoizNoiz he shows all the cut-and-paste sampling genius of Shadow as well as Art Of Noise’s quirky brilliance with processed cut-up vocals, and then some. In particular he has a talent for voice samples. He shreds and re-contextualises assorted vocal bytes with grooves of slow funk, stoned hip hop and a bit of drum’n’bass, and his technique is jaw-dropping. Any discernible words no longer matter; the voices have become pure instruments. And it’s far from just being a display of virtuosity, because once you get past the technique the natural musicality of Banabila’s creations shines brightly. A leftfield downtempo masterpiece. (Mike Watson)

Alongside the group of musicians Banabila assembled to play on the ‘VoizNoiz’, tracks are also constructed from tapes, found sounds and location recordings of voices from the streets of Yemen and Holland. The album takes a hip-hop like Magpie approach to recontextualizing raw materials - weird and wonderful/traditional international obscurities and folk musics are sampled and collaged, smearing their geographic roots into a new borderless music. The way in which he takes disparate elements and creates such coherent tracks with the players is magnificent. The results are somewhere between Holger Czukay’s ethnomusical oddities and Madlib’s deep crate digging Beat Kondukta series if he also included a band. There are also some occasional absurd moments reminiscent of Nurse With Wound or People Like Us.

There’s a lot to absorb across the twenty relatively short tracks, some of which are like vignettes, but as a whole, it feels like a global journey without leaving home - except the order and location of things has been totally shuffled and jumbled. Therefore nothing is how you imagined it would be, and some of the strange manipulated and processed voices make it kinda trippy! (Ant)

TONESHIFT:
Hard to do a quick summation on this one as it has some distinct personalities, all quite wonderful and odd. Banabila brightens the room with abstract effects, crackle and hiss and playful genre-bending – from blues to pop to world musics to county fair to folk and back again – all brought together in a clever electronic production. It’s got a soul and a wry sensibility. Oh, and there’s a notable, bright mix collaboration with Oene Van Geel. (TJ Norris)

RYM:
With Voiz Noiz, Hull's Pork label inducted Rotterdam’s Michel Banabila and his seven-strong multi-instrumental crew into its prestigious stable. Primarily a sound artist, Banabila couches his experimentation with tapes and found-sound in colorful grooves constructed around voices recorded on the streets of his native Holland and in Yemen. He surrounds samples with funky 4th World beats and Oriental instrumentation instead of breaking down the sounds into raw electro-acoustic matter. The giddy craft recalls Mouse on Mars’ Iaora Tahiti but owes as much to Caetano Veloso's loopy Araça Azul and to ethnomusical forgers like Holger Czukay and Roberto Musci and Giovanni Venosta. These 20 tracks are like skits linked by language and the musicians’ joy in ethno-absurdity, wherein breakbeats swept up from the rubble of a bustling Babel sprout from the global glossalalia like freaky minarets. (echoinggrove)