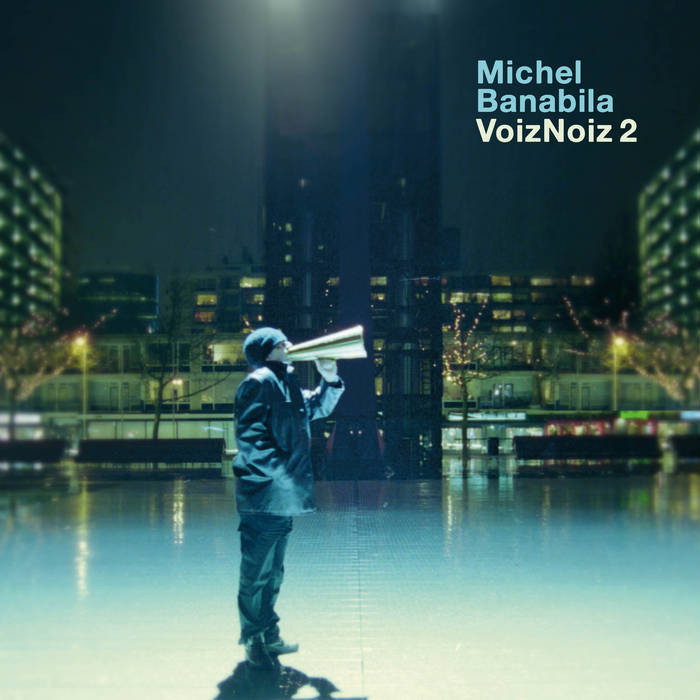 EARPOLLUTION : VoizNoiz 2
Michel Banabila has an ear for sound and a pulse which runs through his fingers. Taking a nearly limitless number of samples, he finds a common pulse that they gravitate towards, and produces groovy - nearly trip-hop style - songs. There are no voices other than the stolen ghosts which become halting, tripping verse-chorus-verse arrangements under his skillful manipulation. "Voiz IX" is a wheezing street orchestra, a tiny marching band made up of two kids banging on trash cans, one over the hill tuba (worked over by a much younger player with a decent set of lungs), a couple of single-stringed guitars, a kid with an old radio sporting exposed wiring, and a drum major with a three-dollar megaphone. Banabila reworks all these elements (and the echoes which their street performance leave rattling down the long alleys) into something else, something a little less than a recognizable tune and more into a musique concrete abstraction. At the other end of the spectrum is the following track, "Speak," which hums along at 144 bpm, hammering and jabbering beneath a cut-up vocal track that speaks in starts and stutters. Like all good pastiches, you find comfort in the recognizable elements and thrill in their unexpected juxtaposition. Banabila's work on VoizNoiz II is a soundtrack to the urban chaos which is the overwhelming reality of city living. (Mark Teppo)

INK 19 : VoizNoiz 2
Considering you can give a whole group of people a fancy recording studio, tons of personal attention and pampering and they create audible crap, artists such as Banabila are all the more wonderful. His sophomore release in the Urban Sound Scapes series, Banabila recorded VoizNoiz 2 completely in his home studio. Mainly, sounds are used to create "words" of sound that speak in the language in which we hear. There is a world flavor, a little "trip-hop" label floating around, and one visionary artist behind every moving track. Creepy, loungy, jazzy, sexy, mysterious, fun, and artsy, this is for anyone who's bored with their current musical interests. This album makes you open so many musical doors. A few standout tracks: "Heavy Gravity," the bouncy, tribal "U Beat," sporadic "Speak," and "To The Angels." Learn a new language with Banabila, the language of sound. (Vanessa Bormann)

ALL MUSIC GUIDE : VoizNoiz 2
The second volume in Banabila's series of Urban Soundscapes is much like the first, a kaleidoscopically funky collage of found sound, aural experimentation, trip-hop beats, and promiscuous sampling. As on his first effort, a willfully bizarre sonic design sense is constantly counterbalanced by a thoroughly populist approach to the groove ‹ there is nothing on this disc listeners won't be proud to dance to and nothing that won't catch them by surprise if they listen hard enough. A few examples: the creaking door, splashing water, and severely altered voices on "Voiz VIII" that rub sensuously up against metallic guitars and a thick, slow groove ; the lurching, Tom Waits-ish "One for the Road," with its turntable-scratching and locomotive sample; and the slow-building "Dinoh Dinoh," which starts off with layers of deeply tweaked voice samples and slides into an irresistible mid-tempo breakbeat with horn section and Hammond organ. The avant-garde is at its best when it's funky, and funk is at its best when it's avant-garde. (Rick Anderson)